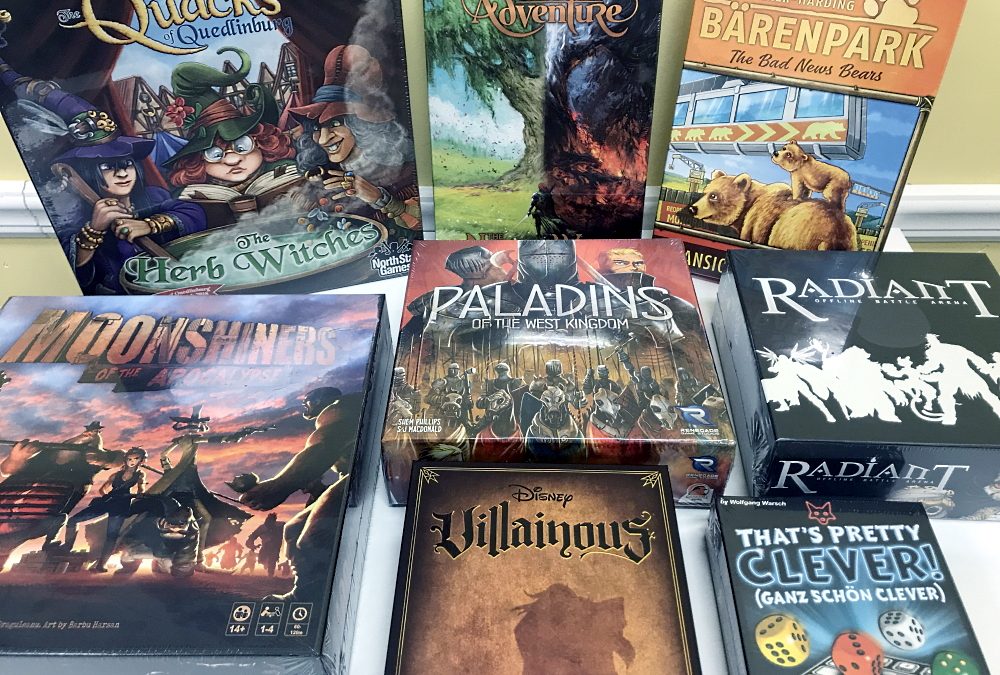 The Quacks of Quedlinburg: The Herb Witches

Expand your Quacks of Quedlinburg – the winner of the 2018 Kennerspiel des Jahres award! With The Herb Witches expansion, you can now play The Quacks of Quedlinburg with a fifth player! Try some new Locoweed to your cure-all potions or add some new extra-large pumpkins. You can even try new ingredient books! If you’re struggling to find the perfect recipe, maybe one of the three Herb Witches can lend a hand. With countless more exciting brewing options, “Quacks” fans will enjoy pressing their luck even further with hundreds of more potion-creating sessions!

Call to Adventure: Name of the Wild

Name of the Wind is a 75-card expansion for Call to Adventure based on The Kingkiller Chronicles by Patrick Rothfuss. This expansion adds new challenges, new destinies, and mechanisms unique to the author’s world to the base game.

Bärenpark: The Bad News Bears contains three separate modules that can be used individually or together with the Bärenpark base game.

Moonshiners of the Apocalypse is a morally questionable, not so cooperative mashup of town-building, 4x game for 2-4 players, with a tad of dice combat. In other words, Moonshiners is the one game you need to stay away from if you worry about dark humor, morally questionable choices and “drinking” with your enemies until they pass out.

Set in an alternative post-apocalyptic 1920’s, players compete over exploring and re-building the deserted “Shanty Town”. Explore and discover, scavenge for resources and build houses for the poor survivors. All of this while fighting off the hordes of disgruntled crowds that roam the town with the sole purpose of messing with your precious achievements. Did we say fight? We meant drink them under the table. Arm yourself with a crate of the strongest booze, some hangover aid and start drinking, because any unchallenged enemy will hunt you down and wreck your buildings.

Explore, expand, exploit and exterminate, scavenge for resources, raise distilleries, produce moonshine and sell it into your Saloons to maximize the profits, because when time is up, only one Hero will be able to pay for the ride out of “Shanty Town” and win the game.

This is the Deluxe Kickstarter Edition, and will not be available again once these sell out. This edition includes the exclusive (characters and their figures), plus all the cardboard resources are upgraded to wooden tokens.

Paladins of the West Kingdom

Paladins of the West Kingdom is set at a turbulent time of West Francia’s story, circa 900 AD. Despite recent efforts to develop the city, outlying townships are still under threat from outsiders. Saracens scout the borders, while Vikings plunder wealth and livestock. Even the Byzantines from the east have shown their darker side. As noble men and women, players must gather workers from the city to defend against enemies, build fortifications and spread faith throughout the land. Fortunately you are not alone. In his great wisdom, the King has sent his finest knights to help aid in our efforts. So ready the horses and sharpen the swords. The Paladins are approaching.

The aim of Paladins of the West Kingdom is to be the player with the most victory points (VP) at game’s end. Points are gained by building outposts and fortifications, commissioning monks and confronting outsiders. Each round, players will enlist the help of a specific Paladin and gather workers to carry out tasks. As the game progresses, players will slowly increase their faith, strength and influence. Not only will these affect their final score, but they will also determine the significance of their actions. The game is concluded at the end of the seventh round.

Radiant: Offline Battle Arena (ROBA) is a 1v1 draftable shuffle-building card game that brings the immensely popular multiplayer online battle arena (MOBA) video game genre to the tabletop! The game brings the team building, drafting features, strategic positioning, and player skills of a MOBA to the tabletop for players to challenge themselves with. The player selects three different heroes, then shuffles each of those hero’s decks together to create their main deck which they will utilize to compete against their opponent. The players then use the heroes to move around the different lanes of the board to outplay and outmaneuver their opponent with the goal of defeating their opponent’s Deity to claim victory. The rules of the game are simple while having a great deal of depth and strategy. Each action leads to further choices as you decide how to outmaneuver and out combat your opponent!

What makes Radiant: Offline Battle Arena stand out? There are a number of aspects of ROBA, particularly in combination with each other, that make the game stand out on the tabletop:

In Disney Villainous: Evil Comes Prepared, each player takes control of one of three Disney characters, each one a villain in a different Disney movie, specifically Scar from The Lion King, Yzma from The Emperor’s New Groove, and Ratigan from The Great Mouse Detective. Each player has their own villain deck, fate deck, player board, and 3D character.

On a turn, the active player moves their character to a different location on their player board, takes one or more of the actions visible on that space (often by playing cards from their hand), then refills their hand to four cards. Cards are allies, items, effects, and conditions. You need to use your cards to fulfill your unique win condition.

One of the actions allows you to choose another player, draw two cards from that player’s fate deck, then play one of them on that player’s board, covering two of the four action spaces on one of that player’s locations. The fate deck contains heroes, items, and effects from that villain’s movie, and these cards allow other players to mess with that particular villain.

That’s So Clever (Ganz schön clever) – Back in print!

One of the hottest roll-and-writes is back! Choose your dice well in Ganz schön clever to enter them into the matching colored area, put together tricky chain-scoring opportunities, and rack up the points. The dice you don’t use are as important as what you do because every die that’s smaller than the chosen one can be used by the other players, keeping everyone in the game at all times.