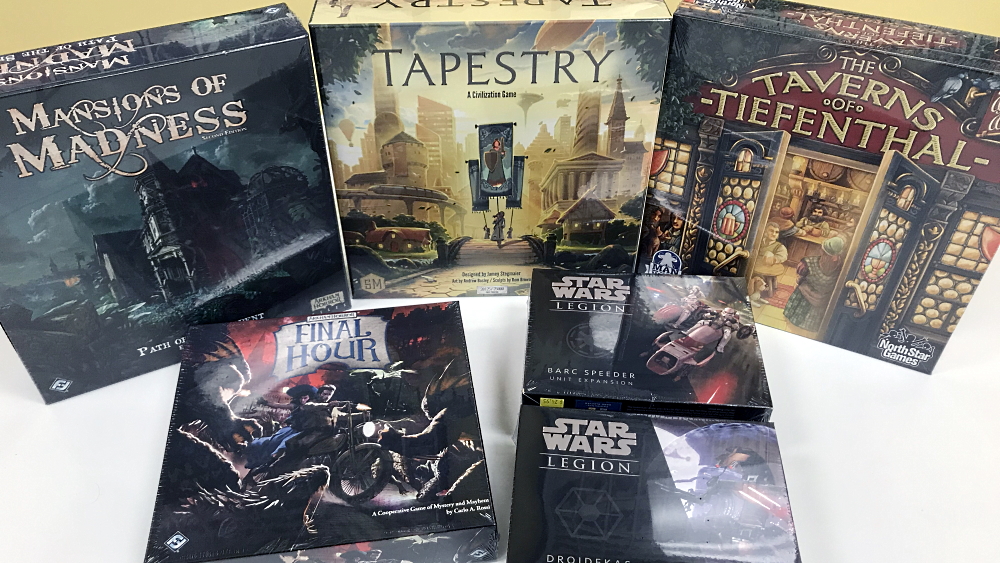 Tapestry is here in very limited quantities! All preorders will be fulfilled! Tapestry is a two-hour game for 1-5 players designed by Jamey Stegmaier (Scythe). Create the civilization with the most storied history, starting at the beginning of humankind and reaching into the future. The paths you choose will vary greatly from real-world events or people — your civilization is unique!

In Tapestry, you start from nothing and advance on any of the four advancement tracks (science, technology, exploration, and military) to earn progressively better benefits. You can focus on a specific track or take a more balanced approach. You will also improve your income, build your capital city, leverage your asymmetric abilities, earn victory points, and gain tapestry cards that will tell the story of your civilization.

Mansions of Madness: Path of the Serpent

For all its primal beauty, the thick trees and lush greenery of the jungle conceal many perils. Unrelenting heat, limited supplies, and sharp-toothed beasts would be enough to drive any intrepid explorer back to the comforts of civilized society. Those that survive these ordinary dangers are rewarded only with more challenges: cursed idols, trap-filled temples, and long-forgotten gods await any who would dare to uncover them.

Path of the Serpent is an expansion for Mansions of Madness that sends investigators into the unexplored wilderness of the Amazon jungle. Investigators must discover ancient secrets of lost civilizations, stop a serpent’s curse, and explore crumbling ruins in three new digital scenarios that introduce new investigators, puzzles, and mysteries to tempt the curious to travel deeper into the jungle. You will need to fight tooth and claw to survive as you battle horrifying serpent creatures, face stone monstrosities that come to life, and face the ever-present danger of becoming lost to the jungle forever. Journey into the forgotten reaches of this world and discover the secrets that await!

You arrived too late to stop the loathsome rite, and a monstrous, transdimensional Ancient One tears through reality. An iridescent rift slashes across the darkened skies, heralding the nightmarish creatures that pour into the hallowed buildings of Miskatonic University. As howls and screams cut through the night, there is only one path left for your fearless investigators—hold back the horde long enough to somehow reverse the summoning.

Arkham Horror: Final Hour is a fully cooperative, fast-paced board game for one to four players. An endless tide of monsters sweeps across the Miskatonic University campus, and you must hold them back, all while searching desperately for the ritual components you need to put an end to this insanity. Playable in under 60 minutes, your fate depends on cooperation between you and your fellow investigators. The odds against you are astronomical, but if you don’t succeed, this will indeed be the final hour for Arkham… and the world.

The Taverns of Tiefenthal

From the designer of The Quacks of Quedlinburg! In the village of Tiefenthal lies “The Tavern of the Deep Valley”. There, all citizens from the area gather, but it’s important to attract new, wealthy guests for only then is there enough money to expand the tavern, which will then lure nobles into the tavern as well. But which tavern expansion is best? Should you focus on money? Or rather ensure that the beer will keep flowing?

In The Taverns of Tiefenthal, the challenge is to skillfully choose the dice and develop your personal deck of cards as profitably as possible. The game is structured with five modules so that your group can add extra levels of complexity as you become more familiar with the game.

Versatile and swift, BARC speeders are designed to assist clone troopers as they scout the field, protect key targets, and launch rapid surprise attacks. These durable speeder bikes are armed with heavy blasters and fitted with powerful engines, making them useful in nearly any theater of ground war across the galaxy.

Within the BARC Speeder Unit Expansion, you’ll find one unpainted, finely sculpted BARC speeder miniature identical to the miniature included in the Star Wars: Legion Clone Wars Core Set. If you choose, this miniature can include a sidecar featuring a built-in M-45 Ion Blaster or a Mark II Medium Blaster. Similarly, a Phase I Clone Trooper can fire an RPS-6 rocket launcher from the sidecar. This expansion also includes a unit card and an assortment of six upgrade cards inviting you to outfit your speeder to fit your personal battle plan.

Versatile and extremely destructive, Droidekas are a threat to even veteran squads of clone troopers and skilled Jedi Knights—and when B1 Battle Droids fail, droidekas are often sent to execute their primary function: annihilation of their targets. Rolling swiftly into battle, droidekas unleash their arm-mounted twin blasters, pouring out withering torrents of fire.

The Droidekas Unit Expansion lets you support your droid forces with some of the most powerful combat droids in the galaxy. Four finely detailed, unpainted Droideka miniatures identical to those found in the Star Wars: Legion Clone Wars Core Set represent your Droidekas as they speed across the battlefield in wheel mode and unleash suppressive fire in their attack configuration. Meanwhile, a unit card fully outlines the Droidekas abilities while three upgrade cards give you the freedom to modify them with comms systems.