A Weekend’s Worth of New Games! 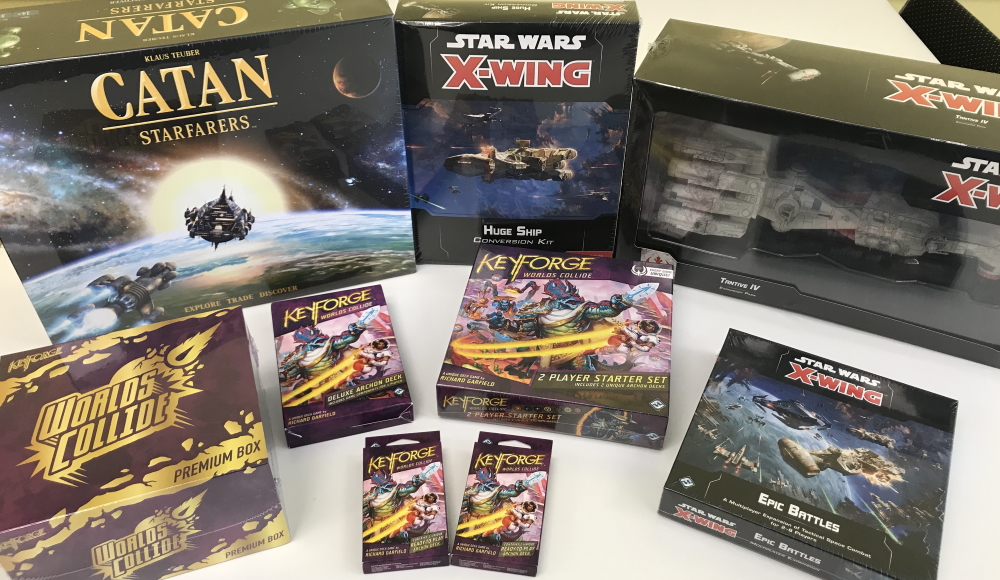 Twenty years ago, the settlers started into the depths of the galaxy to discover unknown planets, the undiscovered universe lying before them. Maybe they’ll find planets with good ore or carbon deposits — or perhaps only barren ice planets. They might encounter alien folks and start lucrative trading, with pirates and wormholes being a constant challenge for them.

Catan: Starfarers is a new version of Starfarers of Catan, originally released in 1999, that contains completely revised graphics and game materials, revised rules, and (most importantly) a variable game board that brings even more variety to the exploration of space.

The new KeyForge set has arrived! This Unique Card Game is like a collectible card game, but no two decks are ever alike, and you can’t change them! Long regarded by Bryan as “the game that keeps all the good stuff about CCGs and removes all the bad,” this is a fantastic game of discovery and strategy. What’s more, there is never a barrier to entry, as you can pick up any deck and start competing. The new Worlds Collide set is completely compatible with older sets, and features two new factions. We have Sealed Decks, Two-Player Starter Sets, Deluxe Archon Decks (which are effectively a one-player starter), and Premium Boxes containing a couple of sealed decks plus deck boxes and other storage.

Launch your Star Wars X-Wing game into bigger battles with the Huge Ship Conversion Kit! This kit contains the components to upgrade your huge ship experience from the First Edition to the Second Edition, including ship cards, upgrade cards, and ship tokens, as well as a new maneuver tool, new huge ship damage deck, and more!

Many of these ships served in multiple conflicts, of course, and you’ll also find entirely new components here that allow you to field a huge ship no matter which faction you choose. Finally, this kit features a variety of new upgrades exclusive to huge ships, including Commands, Teams, Cargo, and potent Hardpoints that grant additional attacks.

With its powerful broadside batteries and advanced command capabilities, the CR90 Corellian Corvette has served as the cornerstone of strike forces since the days of the old Republic. Now these vessels are among the Rebellion’s most valuable warships, slipping Imperial blockades and delivering the decisive blow in space engagements.

Broaden the possibilities of your Star Wars™: X-Wing games with the Epic Battles Multiplayer Expansion! This expansion introduces a totally new way to play X-Wing, inviting two to eight players to engage in epic multiplayer battles as they command massive fleets in large-scale games that evoke iconic Star Wars scenes.