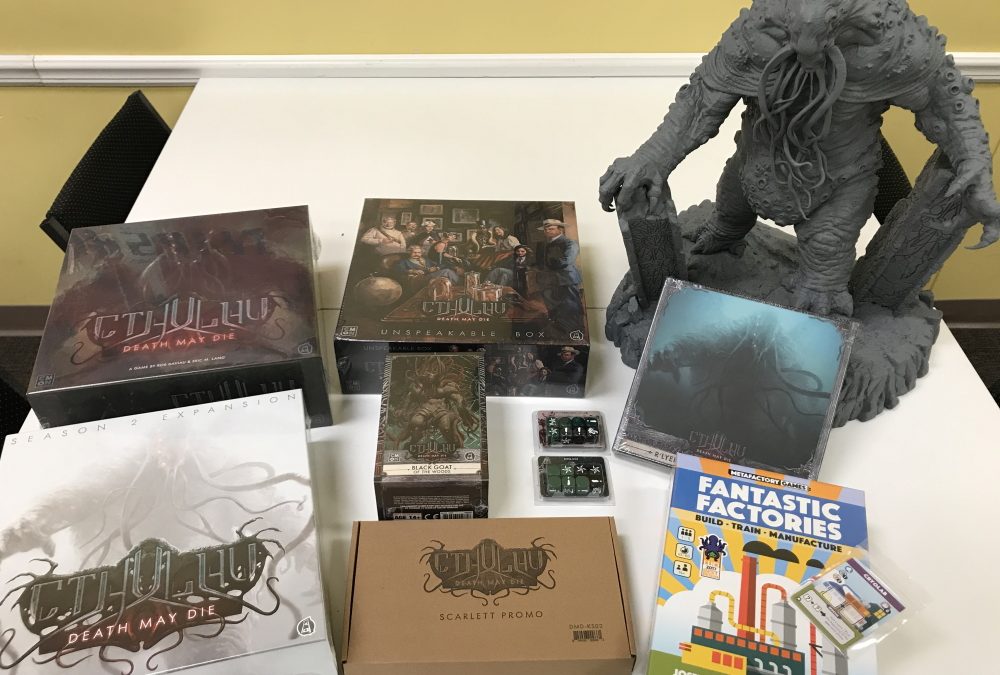 Our pledges have arrived for this massive Kickstarter release!

In Cthulhu: Death May Die, inspired by the writings of H.P. Lovecraft, you and your fellow players represent investigators in the 1920s who instead of trying to stop the coming of Elder Gods, want to summon those otherworldly beings so that you can put a stop to them permanently. You start the game insane, and while your long-term goal is to shoot Cthulhu in the face, so to speak, at some point during the game you’ll probably fail to mitigate your dice rolls properly and your insanity will cause you to do something terrible — or maybe advantageous. Hard to know for sure.

The game has multiple episodes, and each of them has a similar structure of two acts, those being before and after you summon whatever it is you happen to be summoning. If any character dies prior to the summoning, then the game ends and you lose; once the Elder One is on the board, as long as one of you is still alive, you still have a chance to win. The episodes are all standalone and not contingent on being played in a certain order or with the same players.

We have several products available today – some more limited than others. Note the prices below may be lower if you backed through us.

We only have a couple of these available after meeting preorders (remember, kids, it pays to preorder). Included is the core set plus the Unspeakable Box (pictured just to the right of the Core set), which includes a host of Kickstarter-exclusive stretch goals plus a free copy of the Yog Sothoth expansion (releasing on Nov 29). Our price for this is $149.99 (unless you preordered through us). Note that the core set without the Unspeakable Box also releases on Nov 29 and will cost $99.99 (and we are accepting preorders for that right now at 10% off).

Very limited quantities available! Let’s not be coy, the heart and soul of the R’lyeh Rising expansion is its colossal figure of Cthulhu! This cyclopean creation is something never before seen in the world of board gaming. Its base is 44 x 44 cm wide, and it stands 57 cm tall to the tip of its wings. In fact, this thing is so huge that his base becomes the board on which the game is played! This plastic statue was sculpted in terrifying detail and will come pre-assembled, with the exception of the clip-on wings, so it can be proudly displayed for all to see.

R’lyeh Rising is a wholly unique Episode, the epic finale to Death May Die, not only bringing its own set of tokens, Discovery cards, Monster cards, and Mythos cards, but also drastic changes to the game’s base rules, as the figures move and act freely upon the behemoth’s rocky base.

In R’lyeh Rising, the ritual has already been completed. Cthulhu’s appearance is imminent. The world as we know it is doomed. However, we’ve got one last chance! Investigators travel to the realms of R’lyeh itself in an attempt to destroy Cthulhu in transit between the two worlds! In this final episode, the action takes place on Cthulhu as the board itself. with figures moving freely upon the terrain with the aid of a movement ruler. Investigators must defeat Cthulhu one stage at a time, like a regular Elder One fight – except they may only attack one area of the Elder One at a time. R’lyeh Rising comes with its own Mythos deck featuring additional Monster summoning and unspeakable events generated by Cthulhu’s presence. You must stop Cthulhu before he enters our world!

Or, you can just buy this for the figure, which is what a few folks have chosen. 🙂

The Season 2 expansion brings a lot of content to expand your experience with Death May Die. From a whole roster of unique Investigators, to 6 brand new Episodes, introducing all manner of new rules and elements to the game, utilizing a new set of game tiles, and pitting a host of terrifying new monsters in all shapes and sizes against the players! And while supplies last, it includes Scarlett Hayes, an added Kickstarter-exclusive figure and dashboard!

The Black Goat of the Woods is an expansion for Cthulhu: Death May Die. This box brings an entire new Elder One for you to use in combination with any Episode, creating a whole new gaming experience as you try to fight through the swarm of Dark Young to eventually put an end to the Black Goat itself!

Two dice sets means more handy dice! Note the Frost Dice are a Kickstarter exclusive and will not be available again once they sell out.

Our Kickstarter pledges have finally arrived!

It’s a manufacturing arms race! Compete against other players as you try to build the most efficient set of factories in the shortest amount of time. You must carefully manage your blueprints, train your workers, and manufacture as many goods as possible in order to achieve industrial dominance!

In Fantastic Factories, you race to manufacture the most goods or build the most prestigious buildings. There are elements of dice rolling, worker placement, engine building, resource management, tableau building, simultaneous play, and some card drafting. Each round is split into two phases, the market phase and the work phase.

During the market phase, you choose to either acquire a new blueprint for free or pay to hire a contractor. Blueprints are used to construct new factories during the work phase. Contractors can be used to reinforce your strategy by providing resources or allowing you to roll additional dice. You need to be mindful of what cards are available in the marketplace and the strategies your opponents may be pursuing.

During the work phase, all players simultaneously roll their dice and use their dice as workers to run factories. Factories start as blueprints and need to be constructed. Once constructed, each factory can be used once each turn. Worker placement can happen in any order and figuring out the correct sequence can enable a powerful chain of actions. Additionally, you can build training facilities that allow you to manipulate the dice values of your workers. Each work phase is like solving a unique worker placement puzzle in order to optimize your output of resources and goods.

Once any player has manufactured 12 goods or constructed 10 buildings, the game end is triggered and one additional and final round is played. The player with the most points wins (combination of building prestige and manufactured goods). With over 30 unique blueprints and countless synergies across buildings, each game is unique. Fantastic Factories offers a lot of replay value and satisfaction as players discover new factory engines with each game.