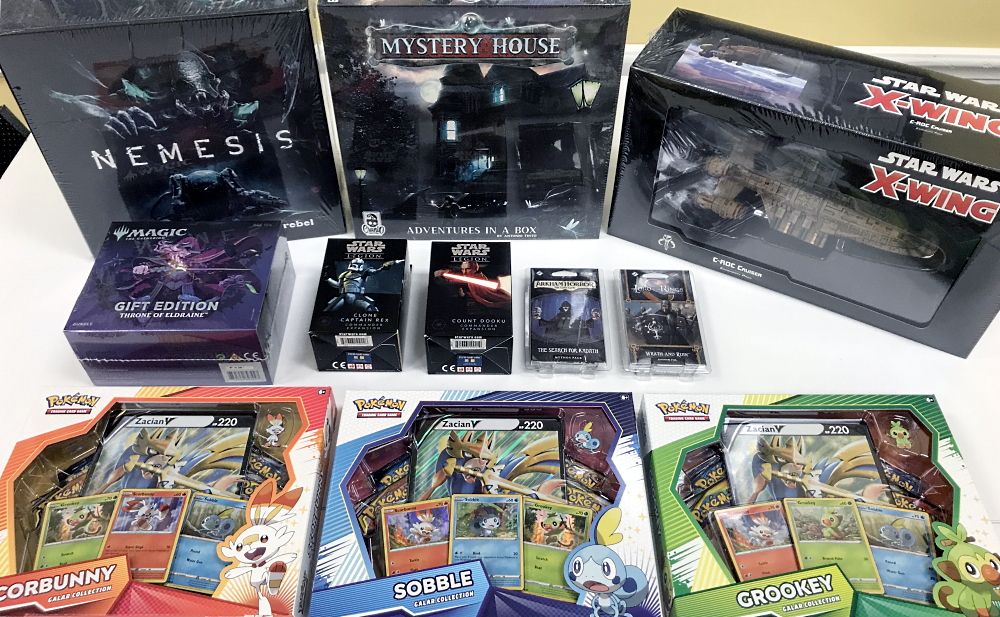 Nemesis is a 1-5 player survival sci-fi game where players are woken up from hibernation as a crew of a space ship. The emergency procedure states that there is a critical system failure and the space ship can’t continue its cruise. The goal of the crew is to find what is causing this failure and fix the situation to safely return back to Earth. The main problem is that one crew member is dead. Somebody crashed his hibernation chamber and pulled his body out. In addition, if you listen closely, some additional noises and sounds can be heard. New ones, strange ones, ones that were never heard before. Nemesis is a cooperation game combined with bluffing, backstabbing, and other elements of a science-fiction survival horror adventure.

Mystery House: Adventures in a Box

This house mysteriously moves through space and time, and no one knows its destination. Will you be brave enough to enter? Experience the thrill of an escape room in Mystery House: Adventures in a Box, which features a mix of technology and tradition. You are imprisoned in this house, and the only way out is to solve all the riddles you find inside! You must search for clues in the box, which features multiple doorways on all sides. At the beginning of the game, you insert enigma cards in the box top, and these cards will tell a story as they’re revealed and resolved during play. An app drives you through the game and records the progress of your team and your playtime. The base game includes two adventures: “Family Portrait” and “The Lord of the Labyrinth”. All future expansions will use the same base game box as a game system.

With special packaging, a Collector Booster, and a unique foil alternate art promo card, Throne of Eldraine Bundle Gift Edition is the go-to choice for shoppers looking to purchase a gift for their favorite Magic fan.

The C-ROC cruiser is the heaviest vessel available to many criminal operations, cartels, and syndicates in the Outer Rim, capable of carrying massive weapons batteries and unique dirty tricks that keep it one step ahead of the law. Whether it’s hauling illicit cargo or marauding the hyperlanes in search of easy targets, the C-ROC is a flexible and dangerous craft.

The C-ROC Cruiser Expansion Pack contains everything both Scum and Villainy and Separatist Alliance players need to incorporate one of these armed transports into their Star Wars: X-Wing squadrons. A selection of ship cards, tokens, and maneuver dials gets your C-ROC into battle, while a suite of upgrade cards invites you to add a bevy of dirty tricks to your cruiser. Finally, a plastic maneuver tool, huge ship resource tracker, and huge ship damage deck make managing your ship fast and easy.

Clone Captain Rex viewed military service as an honor, and his loyalty to the Republic and his Jedi Generals was absolute. Rex honed the use of twin blaster pistols into an art form, leading his fellow clones to victory on countless battlefields across the galaxy. The Clone Captain Rex Commander Expansion for Star Wars: Legion contains everything you need to add this new commander to your Galactic Republic army, including an unpainted soft plastic Clone Captain Rex miniature that can be assembled without his helmet, or with either a Phase I or Phase II Clone Trooper helmet. This miniature comes with Rex’s three signature command cards that give him the power to issue orders to his fellow clone troopers, as well as five upgrade cards inviting you to unlock Rex’s full potential.

While much of the galaxy knows him as the Separatist Alliance’s Head of State, Count Dooku serves a more sinister purpose in the Clone Wars. Actually a powerful Sith lord, Dooku works behind the scenes to bring down the Jedi and destroy the Republic once and for all. As the rare Separatist unit powerful in the Force, he takes to the battles of Star Wars: Legion ready to show off his skills to any bold enough to challenge him. Within the Count Dooku Commander Expansion, you’ll find one unpainted and finely detailed soft plastic Count Dooku miniature challenging all comers with his lightsaber. Additionally, four upgrade cards let you explore the depths of Dooku’s Force powers, while three command cards invite you to make him a central piece of your army’s strategy.

Journey across the Dreamlands in The Search for Kadath, the first Mythos Pack in The Dream-Eaters cycle for Arkham Horror: The Card Game! After taking your first steps into the Dreamlands, your mind teems with anxiety over the quest ahead, dangers you left in the waking world, and the fate of dreamers who have come before you. Are they also somewhere in these expansive lands? Perhaps if you find the lost castle and return with proof of the Dreamlands, you can save everyone: yourself, your friends, and the other dreamers as well. So, despite the advice of the Dreamlands’ inhabitants, you and your companions seek unknown Kadath, where the gods dwell.

The Search for Kadath is Scenario 2–A of “The Dream-Quest.” This scenario can be played on its own in Standalone Mode or combined with the other expansions in The Dream-Eaters cycle to form a larger four-part or eight-part campaign. As your team of investigators becomes separated between the dream and the waking world, you will need to work together across realms to return home. To help you achieve this, you will find new player cards that create new synergies between investigators, letting you offer aid during your turns or even the Mythos Phase. Discover the meaning behind your dreams and the proof you seek!

The Lord of the Rings: The Card Game – Wrath and Ruin Adventure Pack

Wrath and Ruin is the first Adventure Pack in the Vengeance of Mordor cycle for The Lord of the Rings: The Card Game. After traveling down the River Running to the city of Dorwinion, and to the cursed forgotten temples hidden in the Hills of Rhûn, you have managed to defeat the shadow of evil that haunted the city and earned some hard-won peace, or so you thought. But the agents of Mordor are not defeated so easily. An old enemy has returned with a vengeance and they now seek to destroy the city you worked so hard to save. Can you force back this evil once and for all, or will all your efforts to protect the lives of the innocent have been for naught? Wrath and Ruin provides you with 60 new cards to expand your quests in Middle-earth, including a new dwarf hero and three copies of each new player card. This Adventure Pack also offers you a chance to brush shoulders with the enigmatic Tom Bombadil. Prepare you heroes for the fight of their lives and stand united against the shadow of Mordor!