Oceans Kickstarter Editions are In – Read On to Learn The Differences! 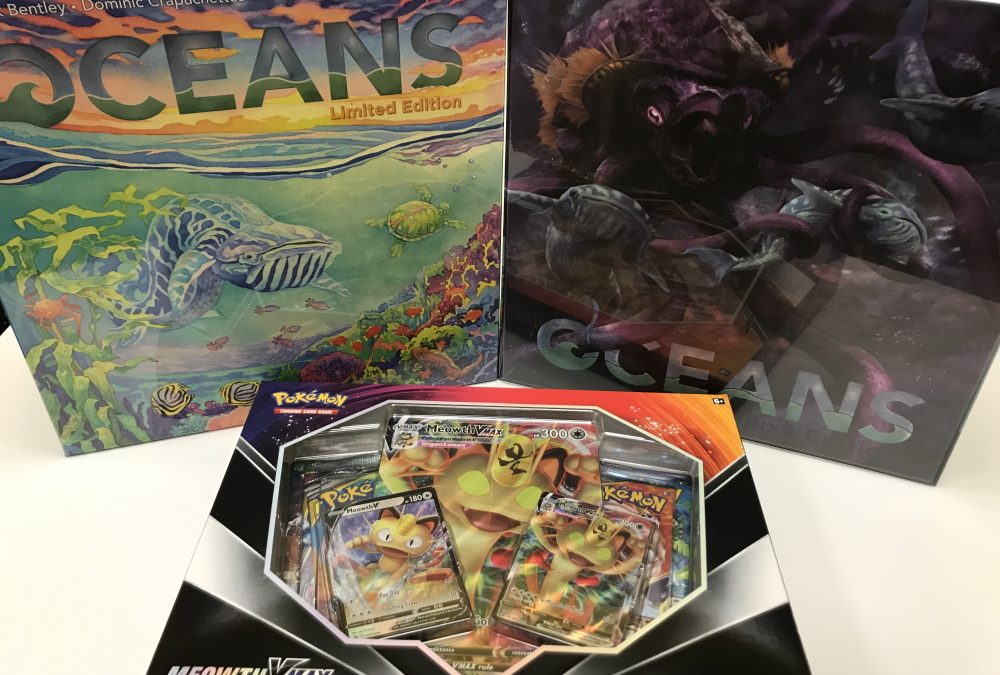 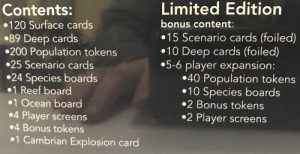 Two years in the making, Oceans is the next stand-alone game in the award-winning Evolution series. Enter a vast, underwater cosmos: a mysterious interconnected world of sharp teeth, glowing eyes, and black ink, where your survival depends on your ability to adapt to the unknown.

The foundation of Oceans is a simple turn structure and a deck of 12 traits, making it easy to learn all of the cards and wade effortlessly into the first game. The 12 traits were chosen because of the rich thematic interconnections, providing a tapestry of synergistic card play. Additionally, there are 2 randomly chosen scenario cards that activate (and sometimes deactivate) at various points during the game. The scenario cards impact the basic tenets of gameplay, encouraging people to vary their play style and strategy each game. This foundation loosely mimics a scientific oceanic ecosystem, similar to what you’ve come to expect from games in the Evolution series. This core is fully playable on its own, but there’s more if you’re willing to dive a bit deeper… 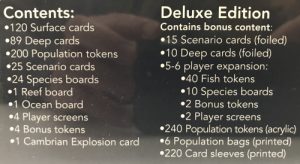 Oceans is an engine builder where the world of science is disrupted at the seams by scientific phenomena too outlandish to be believed. Players must adapt to the changing environment with an interconnected ecosystem that can thrive in the face of the inevitable march of time, and the natural struggle of predators seeking to survive.

The Limited Kickstarter Edition is essentially the “regular” edition of Oceans, but with a bunch of exclusive Kickstarter extras. See the image for details. Once these run our, the regular edition will no longer include those extras. Price is $49.99

The Deluxe Kickstarter Edition includes all of the extras found in the Limited Edition, plus acrylic tokens, special player bags, and sleeves for all your cards (note the three added bullet points at the end of the list). Price is $84.99

Meowth is known as a persistent little Pokémon, a teensy bit grumpy, and loaded with tricks and schemes. Now make it gigantic and power it up as a Pokémon VMAX, and all of Meowth’s big dreams get a little closer to coming true! You get both Meowth V and Meowth VMAX in this special collection, making this the first opportunity to get your hands on the amazing new Pokémon V and Pokémon VMAX cards. You also get an oversize foil card of Meowth VMAX—a suitably sized card for a Pokémon of Meowth’s stature. There’s even a selection of Pokémon TCG booster packs to add to your collection. See if you can make the Scratch Cat Pokémon’s plans pay off with the Pokémon TCG: Meowth VMAX Special Collection.