New Games For Your Wednesday! 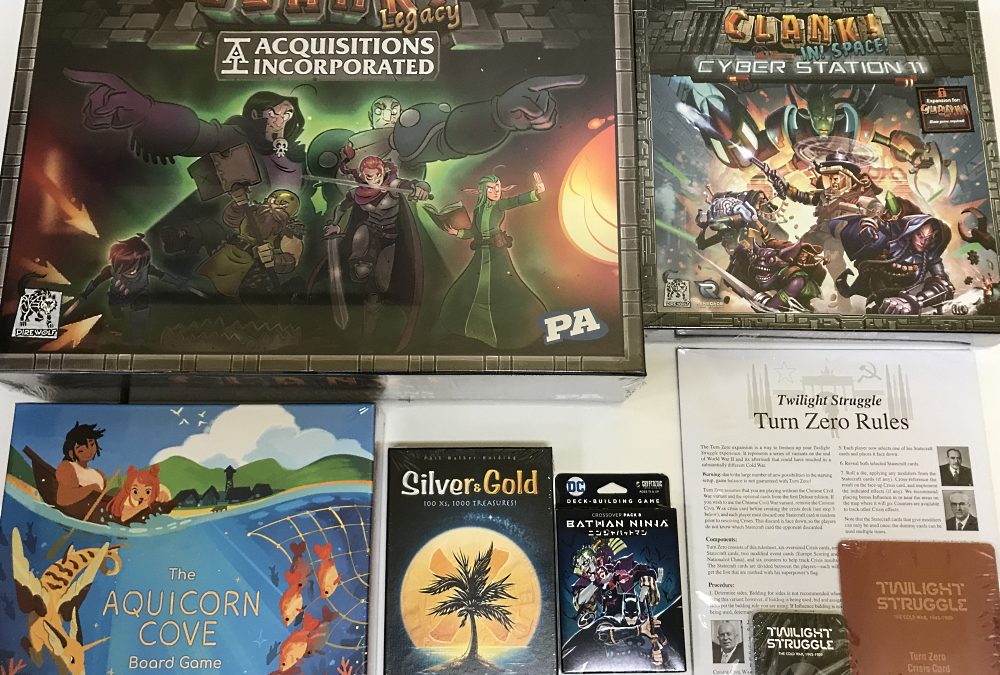 Clank! Legacy: Acquisitions Incorporated extends the deck-building fun of Clank! with legacy-style gameplay! Found your own franchise of the legendary adventuring company Acquisitions Incorporated, and shepherd your fledgling treasure-hunters to immortal corporate glory over the course of multiple games. Your game board, your deck, and your world change as you play to create a unique campaign tailored to your adventuring party. Be cunning, be bold, and most importantly be ready…

If there’s a cybernetic enhancement worth having, the ruthless Commander Preon has it. Eager to prove her worth to Lord Eradikus, she has built a research station on the edge of civilized space. Since Cyberware is all the rage, the place makes a tempting target for you and your fellow thieves. Whether it’s illegal, hazardous, or just plain fun, you’ll find it on CYBER STATION 11.

The Aquicorn Cove Board Game

When Lana and her father return to their seaside hometown to help clear the debris of a big storm, Lana remembers how much she’s missed the ocean — and the strong, reassuring presence of her aunt. As Lana explores the familiar beach, she discovers something incredible: a colony of aquicorns, small magical seahorse-like creatures that live in the coral reef. Lana rescues an injured aquicorn and cares for it with the help of her aunt, who may know more about these strange creatures than she’s willing to admit. But when a second storm threatens to reach the town, choices made many years ago about how to co-exist with the sea start to rise to the surface. Lana realizes she will need to find the strength to stand on her own, even when it means standing up to the people who she has always relied on to protect her.

In the co-operative game The Aquicorn Cove Board Game, 2-4 players take on the roles of members of a small fishing village struggling to survive while maintaining a balance with the natural world. To win, the villagers must feed and grow their village, while helping to restore the health of the reef and aquatic ecosystem. The villagers are fortunate, though, and the waters of their cove are home to the beautiful and benevolent aquicorns, as well as the wondrous reef guardian Aure, who can help them both to understand the impact humans are having on the environment and to save the village.

Distant islands with golden treasures — who hasn’t dreamed of that?! Silver & Gold combines simple rules, fast action, luck, and planning as players try to complete treasure map after treasure map, with the maps being printed on wipeable cards to allow for endless adventures…

The Super-Villains — The Joker, The Penguin, Poison Ivy, Deathstroke, and Two-Face — are the daimyos who battle from within giant castles that come to life. When the fifth one has been defeated, the five castles merge to become one final titanic challenge. The card backs of the Super-Villains each form a portion of the giant merged castle, with The Joker’s head at the top.

Each Super-Villain has colors on its four sides matching the main card types: Hero, Villain, Super Power, and Equipment. During your turn, if there is a card matching one of those types in the Line-Up, you must take the card and place it next to the corresponding side of the Super-Villain. When you defeat a Super-Villain, instead of placing it in your deck, you earn each card attached to it.