Start Your Weekend Right with a Ton of New Items and Cool Restocks! 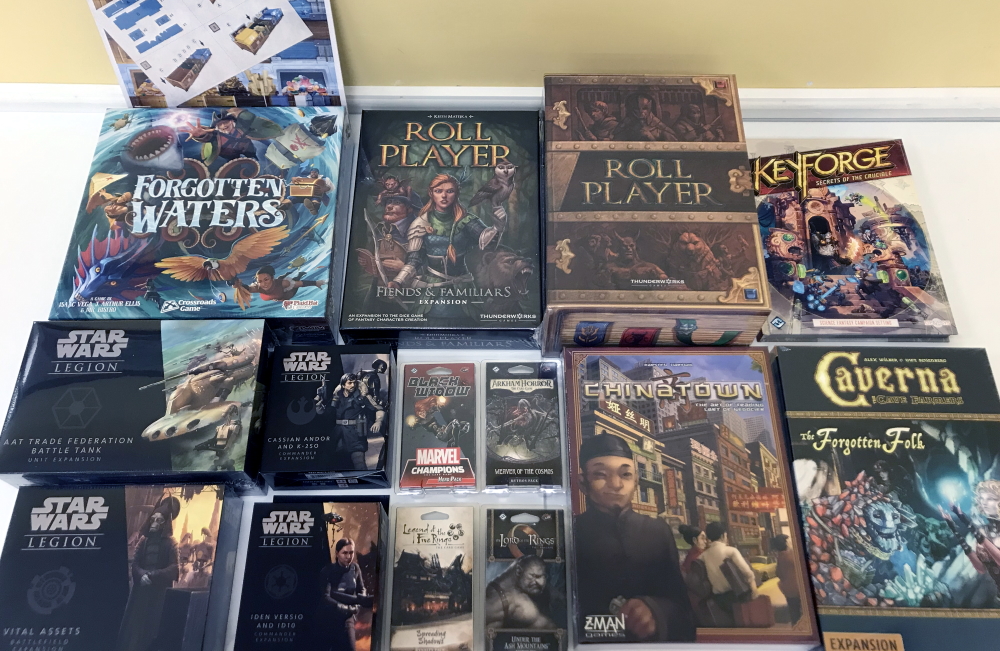 Publishers and suppliers are getting back on track and that means new products and restocks! Check out the new items and order them via our web portal for pickup later – or just come on in and shop like the good ol’ days (bring your mask)!

Forgotten Waters is a Crossroads Game set in a world of fantastical pirate adventure. In it, players take on the role of pirates sailing together on a ship, attempting to further their own personal stories as well as a common goal. The world of Forgotten Waters is silly and magical, with stories designed to encourage players to explore and laugh in delight as they interact with the world around them. It’s a game in which every choice can leave a lasting impact on the story, and players will want turn over every rock just to see what they find. Forgotten Waters features five scenarios and a massive location book that provides players with tons of choices wherever they go.

The Big Box contains the complete Fiends & Familiars expansion, in an expanded decorative box which will also hold the core set and the Monsters & Minions expansion! Supplies are limited.

In Roll Player: Fiends & Familiars, players can add more depth to their hero by adding a familiar to their character. These creatures add more options during character creation and help each player explore the mechanics of the game in new and different ways. Fiends distract the players and provide new obstacles along the path of creation. A brand new set of Monsters give the players variety to the end of the game, while new Minions are added to the Minion deck that provide new and different goals for the players to reach. New classes and Market cards provide even more variety to each game of Roll Player. Again, players earn Reputation Stars by constructing the perfect character, but can explore new strategies and options as they ready their familiar while they sidestep the pesky fiends along the way. Requires Roll Player to play.

In the center of the universe hangs the Crucible, a gigantic artificial world created by the enigmatic Architects and home to countless beings and cultures. Here, impossibly advanced technologies mix with arcane powers to make for a setting unlike any other! Uncovering the secrets of this mysterious world will take all your skills—but the potential rewards are boundless…

Explore this world of boundless opportunity in Secrets of the Crucible, a new sourcebook for the Genesys Roleplaying System set in the KeyForge universe! This 272-page sourcebook allows you to undertake fantastical adventures and uncover the Crucible’s many wonders and dangers. Lost civilizations, cryptic conspiracies, bizarre environments, mutated monsters, and more await! Secrets of the Crucible contains new character creation options, unique weapons and armor, new skills revolving around the mysterious æmber, bizarre adversaries, and a new adventure builder that puts all these aspects together!

We have four new expansions for your Star Wars battlefields:

Cassian Andor and K-2SO
One of the Rebellion’s most capable intelligence agents, Cassian Andor has dedicated his life to the cause. Capable of both leading an all-out assault or operating independently on the battlefields of Star Wars: Legion, Andor is a versatile addition to any Rebel army. No matter what role you choose for Andor, the reprogrammed KX-series security droid K-2SO is ready to assist in any operation with both his massive strength and tactical analysis. Within this expansion, you’ll find beautifully detailed, unpainted hard plastic Cassian Andor and K-2SO miniatures that feature a wealth of customization options. Cassian Andor can be assembled with three different weapon options, including his compact blaster and his A-280-CFE in its pistol configuration. K-2SO, meanwhile, can be assembled carrying Jyn Erso’s SE-14 blaster, a grenade, or with his hands free. This expansion also contains four new command cards—three for Cassian Andor and one for K-2SO—as well as two unit cards and nine upgrade cards that let you outfit this pair with additional weapons, gear, and more.

Iden Versio and ID10
Whether they’re battling enemy fighters from the cockpits of their TIE Fighters or on the ground below, Inferno Squad is one of the Empire’s most fearsome special forces units and now you can add the leader of this crack team to your Imperial armies. Possessing a keen tactical mind and a deadlier aim, Iden Versio can be an invaluable asset on any mission. Within this expansion, you’ll find finely detailed, unpainted hard plastic miniatures of both Iden Versio and her ID10 seeker droid. Iden Versio herself can be assembled with our without her Inferno Squad helmet and respirator and can also be assembled with three distinct weapon options, letting you build the miniature that fits the look of your army. In addition to these miniatures, this expansion also contains four new command cards—three for Iden Versio and one for her ID10 seeker droid—that invite you to experiment with new tactics. Finally, nine upgrade cards give you the power to further customize these units with new weapons, gear, and more.

AAT Trade Federation Battle Tank
The AAT Trade Federation battle tank is a hard-hitting vehicle favored by Separatist commanders like Lok Durd. While its droid operators require precise commands to be used to full effect, is primary MX-8 artillery laser cannons can blast out barrages that target multiple enemies or hammer the same foe with twice the firepower, and its anti-personnel armament can whittle down even squads as heavily armored as Clone Troopers. With the AAT Trade Federation Battle Tank Unit Expansion, you can add one of these heavy tanks to your Separatist army. The unpainted, finely-detailed miniature you find here can be constructed with its hatch closed or with a B1 Battle Droid scanning the horizon for new targets. In addition to this miniature, you’ll find everything you need to fully customize it to your personal strategy, including eight upgrade cards and a unit card. Blast your enemies with the superior firepower of an AAT Trade Federation Battle Tank! In addition to its anti-personnel lasers and MX-8 Artillery Laser Cannon, the AAT tank can be equipped with a range of shells that unlock even more tactical options!

Vital Assets
Soldiers are called to serve in many types of missions, from tense hostage exhanges to payload deliveries to bombing runs. Wherever and whenever the battle rages, the Vital Assets Battlefield Expansion adds new options to expand the scope of your Star Wars™: Legion games! This expansion contains 16 unpainted, finely sculpted battlefield objective miniatures, including two hostages, six bombs, six crates, and two repulsor pallets that can replace your objective tokens or enhance your battlefield. These miniatures are joined by new battle, hostage, and supply cards that add even more variety to your battles!

Spy, Assassin, Hero: Natasha Romanov has taken on many roles, and played many sides, in a life shrouded in mystery. But throughout every new stage of life, Natasha has developed a unique set of skills that she now utilizes in the role of the Black Widow, international super-spy! Complete your mission with the Black Widow Hero Pack for Marvel Champions: The Card Game! The Black Widow Hero Pack includes a pre-built deck for black Widow utilizing the Justice aspect, the Taskmaster Nemesis set, and additional cards to help increase your deck building options! With well-rounded base stats and a Preparation card for every occasion, Black Widow is always ready for what’s coming next!

Defend the Dreamlands from the schemes of the Spinner in Darkness in Weaver of the Cosmos, the sixth and final Mythos Pack in the Dream-Eaters cycle for Arkham Horror: The Card Game!

Weaver of the Cosmos is Scenario 4–B of The Web of Dreams campaign for Arkham Horror: The Card Game. This scenario can be played on its own in Standalone Mode or combined with the other expansions in The Dream- Eaters cycle to form a larger four-part or eight-part campaign. After the events of Point of No Return, you have finally reached the perilous nightmarescape that you have been led to since the very beginning. Everything has led to this— Virgil’s writings, your companions’ unending sleep, the black cat, all of it. This transdimensional space is home to a spider creature that would obliterate your world and replace it with a new reality. If you cannot stop it, there will be no Earth left to return to, no escape from this hellish dream, and the Dreamlands will be lost as well. You have no choice but to fight.

There is a darkness spreading through Rokugan. War is on the tip of everyone’s tongue and chaos has come to the Imperial Capital. Meanwhile, the Crab Clan fights valiantly to defend the Emerald Empire from the shadows spreading to the south. With Rokugan as unstable as ever, can the samurai of Rokugan stop the spreading darkness? Defend Rokugan with Spreading Shadows, the second dynasty pack in the Dominion cycle for Legend of the Five Rings: The Card Game! Spreading Shadows continues to emphasize the themes of the Dominion cycle, introducing new eminent provinces, cards featuring the rally keyword, and a focus on powerful dynasty events.

Lord of the Rings LCG: Under the Ash Mountains

Under the Ash Mountains is the fourth Adventure Pack in the Vengeance of Mordor cycle for The Lord of the Rings: The Card Game. Your pursuit of Thane Ulchor has almost reached its conclusion. All that stands between you and this dastardly foe are the tunnels of Torech Gorgor under the Ash Mountains. As your journey reaches its final stages, this 60-card pack takes you deep into this labyrinthine cave system where you’ll face dwindling supplies as well as the nameless terrors that dwell there. Food and water will be scarce in these darkened tunnels, so you must conserve your resources if you hope to survive. This task can be made easier with a little preparation and Under the Ash Mountains gives you plenty of tools to deal with dangers you’ll find in the tunnels. Numerous allies can help you find your way, and a new Contract ensures you have a diverse array of options as you inch closer to Mordor. Do you have the will to find your way through before all hope is lost?

Chinatown – Back in Stock!

This is a negotiation game in the truest sense of the word. In it, players acquire ownership of sections of city blocks then place tiles, representing businesses, onto the block-sections. At the end of each turn, each tile you’ve laid gives you some sort of payout, but completed businesses (formed of three to six connected tiles of the same type) pay quite a bit better. All these resources are dealt to the players randomly, however, so players must trade to get matching businesses and adjacent locations.

Caverna: The Forgotten Folk – Back in Stock!

Forgotten Folk consists of eight different species or race packs such as elves, dark elves, and trolls, and now each player in Caverna can be one of these species instead of only the dwarves in the base game. Each species has special advantages and disadvantages, and some species introduce new resources into the game. Each species has four unique rooms, and they replace rooms in the base game, which allows other players to gain the powers of these species.