Pile into the Weekend With This Pile of New Games! 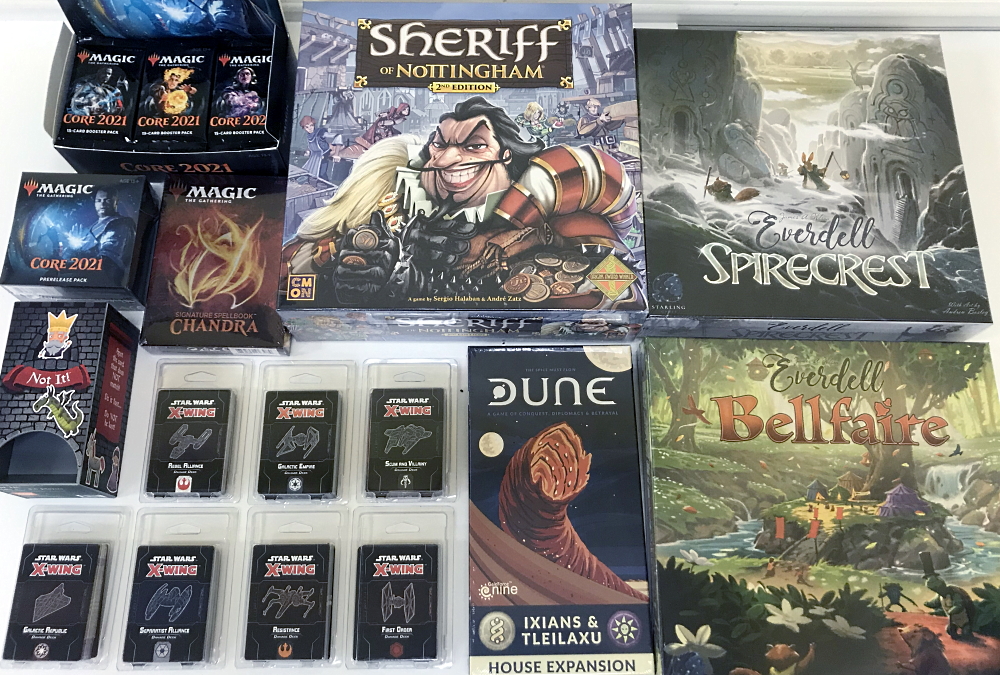 Hit our online shopping portal to grab these items for pickup later, or just come on in – we are open!
https://im-board-games-family-fun.myshopify.com

Core Set 2021 is the perfect place to dive into Magic or power up your collection. Call upon planeswalkers and their powerful spells, learn more about the life and times of Teferi, and score reprints of some of Magic’s most iconic cards. Core Set 2021 introduces the planeswalker Basri Ket and tells the story of one of Magic’s greatest legends, Teferi. Plus, there are guest appearances from fan-favorite planeswalkers like Ugin, the Spirit Dragon. From Grim Tutor to Tormod’s Crypt, M21 is full of cards players have loved for years past and will continue to love for years to come.

M21 is the perfect way to get back into the game or for long-time fans to introduce friends to the community. It’s full of all the combat, strategy, and art that have made the game iconic!

Will the Merchants get their goods past the Sheriff?

The bustling market in Nottingham is filled with goods from all over the kingdom. Most of it is entirely legal, however, Prince John is looking to make sure no contraband gets sold. He’s tasked the Sheriff to inspect Merchant’s wares, looking for any illicit goods. The Sheriff’s shrewd, but not above taking a bribe to look the other way. Which Merchant will end up getting the best goods through and make the largest profits in the market stalls?

In Sheriff of Nottingham 2nd Edition, players take turns playing the Sheriff, looking for contraband goods, and the Merchants trying to stock their Stall with the best goods. The Sheriff can inspect any bag they want, but they must be careful, as they’ll have to pay a penalty if they find the Merchants were telling the truth. This new edition includes updated rules, as well as expansions such as the 6th Merchant, Black Market, and Sheriff’s Deputies.

Far beyond the comfortable borders of the Everdell Valley, deep in the mysterious and uncharted lands, adventure is waiting to be discovered. Spirecrest adds several exciting and challenging new mechanics and features to the Everdell base game, including:

This is not a standalone game. A copy of Everdell is required to play.

The king is throwing an unprecedented year-long event to commemorate the 100th year since Everdell’s founding. Come one, come all, to the Bellfaire! Bellfaire is a new expansion for Everdell that offers several different gameplay modules, including:

This expansion adds two new houses, the Ixians and the Tleilaxu, to the Dune boardgame.

This expansion also introduces new game mechanics to help you gain advantages over your rivals.

In Not It! you join the fun in a magical land as Knights, Princesses, Unicorns, Wizards, Dragons, and Ogres play together in the castle yard.

When the King rolls the 3 dice out of the castle door you must find a card in your hand that does not match any of the dice and then shout “Not it!” Spot the card that does NOT match, do it fast, and don’t be last! If you get rid of all of your cards first you win!

And it comes in a cool plastic dice tower!

Whether your ships are hit by blasters or proton torpedoes, the damage they take in a game of X-Wing is normally tracked by the standard damage deck included in the X-Wing Core Set. With these damage decks, however, you can personalize the look of your squadron by replacing this deck with one that matches the colors of your chosen faction.

Each deck contains a complete set of thirty-three illustrated damage cards that correspond to those in the standard damage deck. While the text of these cards might match, their graphic design makes it clear that your squadron belongs to a particular faction. But these decks do more than simply indicate where your loyalties lie. The cards themselves clearly pinpoint the damaged portion of your ship in Aurebesh on a diagnostic display of one of your faction’s starfighters.